Sheherazade (or Scheherazade) is a legendary Persian queen and the storyteller of the famous exotic fables of One Thousand and One Arabian Nights.

Sheherazade was an Arabian heroine—creative, smart and full of imagination. She inspired the name of our adventure travel company just as she has inspired composers, poets, writers and painters.

Our company, SheherazadVentures is a vehicle for both creative exchange and economic activity for this impoverished region of Morocco. We don’t know the trendy marketing jargon, so we call it ‘socio-ethico-mmercial’ tourism!

We invite community groups, youth leaders, community artists and musicians to bring their skills on holiday to share with the local population! View our Volunteering and Community holiday ideas. 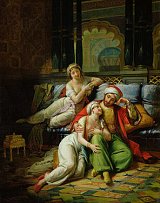 The story goes that every day the bitter and vengeful Persian king, Shahryar, would marry a new virgin, and the following morning he would send her to be beheaded. This was done in anger, having found out that his first wife was unfaithful to him. He had killed one thousand such women by the time he was introduced to Sheherazade, his prime minister’s daughter.

Against her father’s wishes, Sheherazade volunteered to spend one night with the vengeful King. Once in the King’s chambers, she asked if she might bid one last farewell to her beloved sister, Dinazade, to whom she wanted to tell a bedtime story. The King lay awake and listened with wonderment as Sheherazade told her first story. The night passed by, and Sheherazade stopped in the middle of the story. The King asked her to finish, but she said there was not time, as dawn was breaking. So, the King spared her life for one day to finish the story the next night. So the next night, Sheherazade finished the story, and then began a second, even more exciting tale which she again stopped halfway through, at dawn. So again the King again spared her life for one day to finish the story. And so, day by day, story by story, the King kept Sheherazade alive as he eagerly anticipated the finishing of last night’s story.

At the end of one thousand and one nights, and one thousand stories, the King had fallen in love with Sheherazade, and had three sons with her. So, having been made a wiser and kinder man by Sheherazade and her tales, he spared her life, and made her his Queen.

Also in this section: